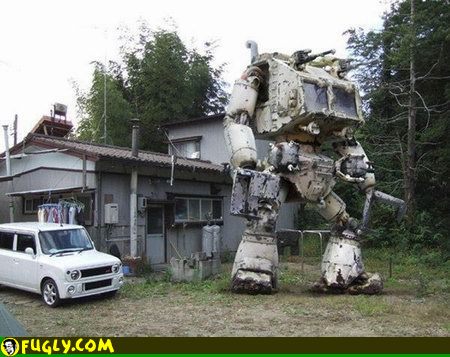 Hello, just some pics of the painted forces for my game of Gruntz moderated Clantroops scenarios.
The first scenario I plan on playing is called the Viper's Fangs.
In this scenario, an Uller C mech enters the board with 4 elementals riding on its back. The Steel Viper
Clan mech and elementals are the attacker, facing off against an all infantry defending force.
The infantry consists of a platoon of 3 squads.relying on heavy weapons, grappel guns, satchel charges, and 4 artillery barrages at their disposal. The first squad has combat armor, while the other two rely on flak body suits. The Uller is a medium mech. The Clan Elementals are commanders with considerable power armor.The infantry are all statted out singly as specialists with 4 hps each. I plan on playing this out after I make all the cards, and will play it with random card activation. 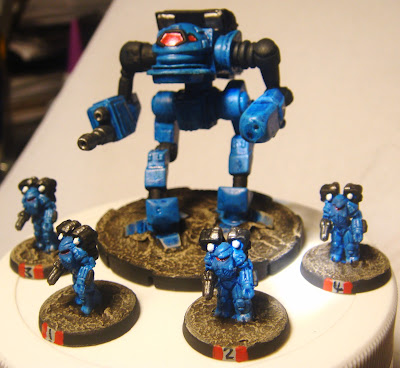 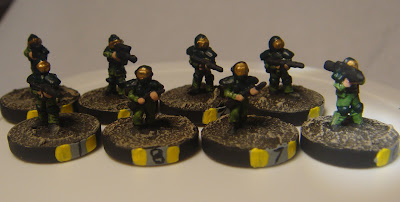 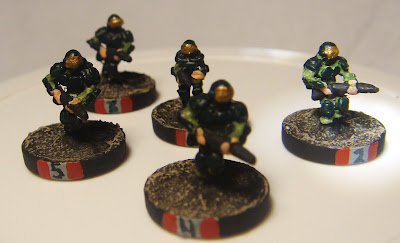 ok, so all i need to do is make up a bunch of cards
Posted by Thorlongus at 4:29 PM 2 comments:

Hello, sorry no pics for this post.
This post is just a summary of my latest project. I am preparing to play a scenario from Clantroops, the supplement to battletroops. Battletroops and Clantroops are two of my most nostalgic games from the times I dabbled in the Battletech universe of gaming. I never seemed to have a lot of fun playing mech vs. mech games. But I was always drawn to infantry engagements, and combined infantry vs. mech desparation games. I thought of playing out a few scenarios from these two books using the original rules, but decided to use Gruntz instead. The only difference being that each infantryman will get rolled up as a commander, and each infantryman will get his own card for card based activation. Each soldier will activate randomly, and independently from his squad.
This scenario is called the Viper's Fangs and the attacker is a Steel Vipers Uller C omnimech with 4 clan elementals hitching a ride. The defenders consist of 3 squads of infantry with grappels and satchel charges.
The scenario gives the defender 15 antipersonell mines and 3 anti mech mines to place and 2 artillery barrages. I am not quite sure how I will handle the mines, as I will be playing solo. 12 satchel charges are allotted for  one time usage....I think I will give them stats as if they were SA missle launcher but with a range of 0 or 1, I envision them as magnetic or sticky,being thrown short range or placed after grappling up to a mech. defender;s first squad has combat armor(soak 12), other squads having flak suits(soak 11).
I still need to stat out the attackers but here goes for the defenders;
Defenders( all will have shoot5; assault 4; guard 11; skill 2 squad leaders will have damage 14, soldiers damage 12) all soldiers have grappel gun!!!!
Squad 1:
LT. 1:1> soak 12; mental 6; laser pistol, laser sword
4 soldiers> soak 12 ; mental 6; laser rifle; total 4 satchel charges
Squad 2 :
SGT. 2:1>soak 11; mental 8; SA medium plasma; satchel charge
3soldiers,2:2,2:3,2:4> soak 11, mental 6; plasma rifles, satchel charges
2 soldiers, 2:5, 2:6> soak 11, mental 6, SA missile launcher
1 soldier, 2:7> soak 11, mental 6, SA medium projectile, satchel charge
1 soldier, 2:8> soak 11, mental 6, projectile rifle, satchel charge
-Squad3
SGT. 3:1> soak 11 ,mental 7, projectile rifle , satchel charge
2 soldiers, 3:2, 3:3> soak 11 ,mental6, projectile rifle, satchel charge
2 soldiers, 3:4,3:5> soak 11, mental 6, laser rifles
1 soldier, 3:6> soak 11,mental 6, SA missile launcher
2 soldiers, 3:7,3:8> soak 11, mental 6, SA medium Grenade launchers
throughout the scenario, any of the 3 squad leaders can call in an artillery strike
instead of their normal action. This can be done four times and squad leader must have los to target
this will count as 1-4(artillery medium) 5-6 (artillery heavy).
in the original scenario, 2 artillery barrages were listed as well as 15 antipersonnel mines and 3 anti mech mines. I decided to leave out the mines , but give 4 artillery barrages to make up for it.
at first I was going to simulate the satchel charges by using AP grenades, but they seemed underpowered when compared to the battletroops stats, now they will have a  damage 0f 9 and an AP of 2, range of 0-1.
one time use, range of 0-1 requres succesfull assault roll, shaped charge, magnetic can explode immediately or 1 turn delay.if immediate, attacker is knocked prone and suppressed..
I think this will be a fun scenario , especialy with card based activation.
Now just to stat out the mech and elementals.
Posted by Thorlongus at 7:02 AM 1 comment:

Hello, just a few infantry squads for my new force for Gruntz...in N scale. The new force i am working on is the East Hydatum Trade Company, think Dutch East Indies Trade in space. I have just finished 5 squads/stands of gruntz in simple body armor, 1 squad of infiltrator gruntz in camo/ghillie suits, 6 squad attachments with laser cannon, minigun or other such heavy weapon., 1 specialist unit mortar,1 squad heavy power armor, and 1 squad light power armor. All converted mechwarrior clickies. next is armor and vehicles. All vehicles for this force will be hover: 3 medium tanks, 3 light tanks, 3 APC's, 6 hoverbikes. 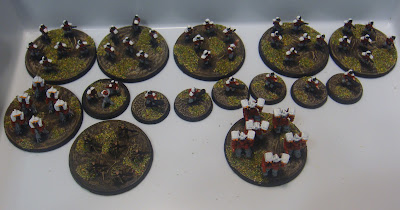 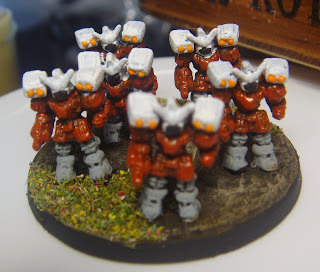 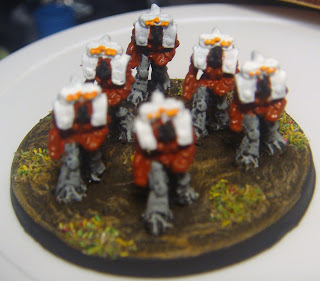 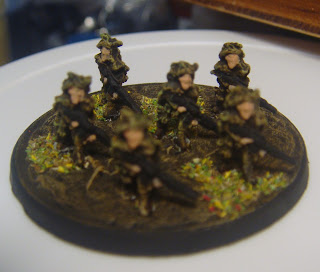 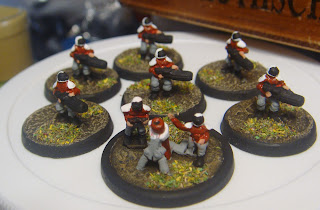 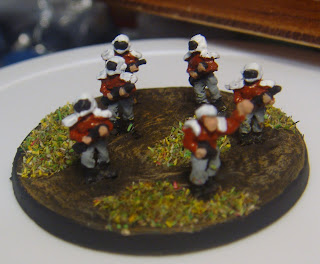 All these are based on Proxie Models wonderful bases..40mm, 25mm, and 20mm
Posted by Thorlongus at 4:39 PM 4 comments:

Hello, sorry for no post for a while, been off on other hobby tangents. One of the things that renewed my interest in this project was finally getting some proper bases. I was perusing Proxie models website, when I saw perfect infantry bases for Gruntz in 10 mm scale. 40 mm diameter bases in black plastic with texture also. I bought 40mm diameter for squads of 6 gruntz; 25mm diameter for specialist figures; and 20 mm diameter for commanders.
Proxie models delivered amazingly good, economical bases in a timely manner.....already thinking of placing another order( cavalry bases for vehicles).
Next project already underway...EHTC, east hydatum trade company, think dutch east indies company in space...color palette is scarlet/ white/ light grey...very british.
Currently painting 4 stands of infantry, light armor..1 stand infantry, unarmored...1 stand light power armored infantry, and 1 stand heavy duty powered armor infantry.
So far undecided on the vehicle options...wheeled, hover, tracked, grav
Just may go with hover/grav so I can use all those lawnmower looking grav bikes
Posted by Thorlongus at 8:06 AM 1 comment: 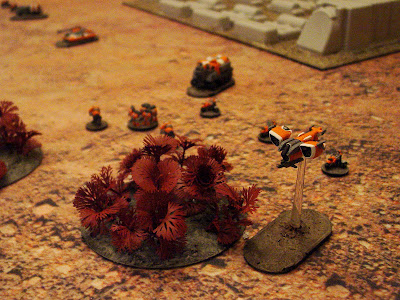 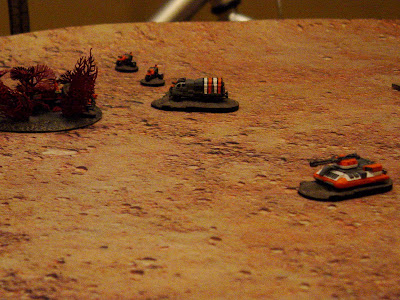 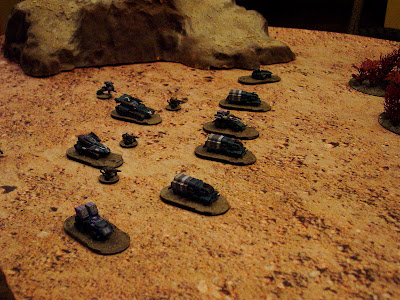 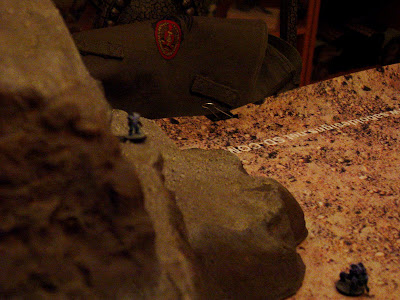 as the board appears beginning of turn 2, the RD pirates have foolishly left the cover of the mining compound to engage the Commonwealth naval force in the scrublands, although they are hugging the cover provided by patches of flora.
The CW naval force is steaming forward ,each APC supported by a light tank, the jump pack toting commander decided to leap onto the cliffs, perhaps looking for some rare alien bird eggs. Only one shot ,so far, a miss by a CW naval specialist laser cannon. 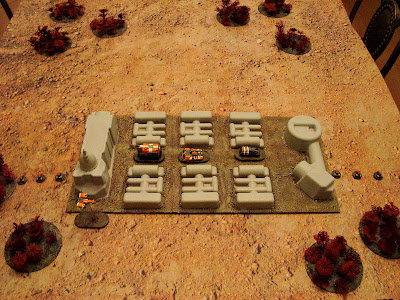 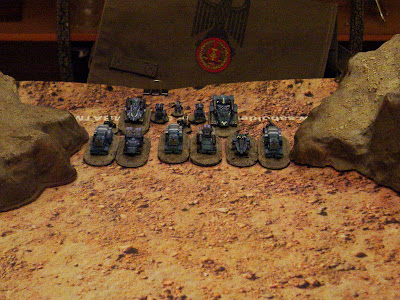 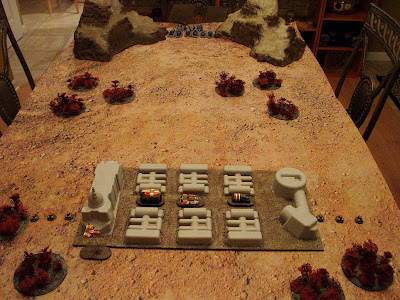 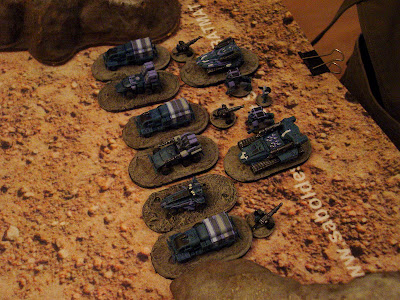 Hello,
These are a few shots of the beginning of my first game of Gruntz , a solo,learning curve game, played in installments on the dining room table. The minis are in the scale of 10 mm, old discarded gems from Mechwarrior CMG, the table I would guess is close to 6 by 4 feet.
The play mat is from sabol design studio, the mountains from some forgotten christmas village thing. the alien plants and small mining outpost scratchbuilt hastily a few days ago, just to have some sort of terrain.
What you see above is the opening deployment as the 571st Commonwealth Naval expeditionary force prepares to liberate the small
mining outpost on a backwater planet from the control of the Porticollis guild of the Rim Defectionists.
The porticollis pirate force( in orange ) prepares to defend their claim using a small swift, technologically well equipped strike force against the lumbering might of the Commonwealth Navy( in blue).
We will soon see how the swift heavy laser attack bikes fare against the numerous clunky vehicles the navy dropped onto this rock.
As luck would have it I only managed time to set up the game and do one entire turn of movement. the navy actually fired one longrange shot with a laser cannon field piece, but missed.
I was initially using card activation for this game, but settled on locking in the activation order from the first turn, to be repeated each turn.... still random enough of a feel to support solo play.
will post pics of beginning of 2nd turn in a bit

Hello, just a little post to discuss different infantry manufacturors for  scifi in 10 mm scale.
This covers quite a grey area  from 10-14 mm in height.
1) Mechwarrior clickies; this is my immediate first choice simply because I currently have a vast collection, and fits in nicely with my 2012 theme " I will buy no more forever".
pros--> cheap, abundant, adequately pre painted, lots of variety, especially for power armor, lots of specialist choices
cons--> Pain in the arse to work with, difficult to separate from integral base. if you can stand keeping them on their brown base and not repainting, then this con is meaningless
2) Heavy Gear infantry from Dream Pod 9 , nice ,limited poses
pros-->metal, less fragile, beautiful sculpts,much easier to work with....desert infantry types
cons---> price,price,price...not as much variety as mechwarrior, might be viable for a desert themed army
or for INFINITY in 10 mm
3)WAVE 1/144 support crew. nice plastic multipose gundam crew members and flight support crew
pros--> interesting body armor, multi pose, plastic ,nice for conversions, cheap, available from Hobbylink japan
cons--> no weapons included, would have to cannabalize some guns from MW clicks, lots of cutting and reposing....but would be good for a different higher tech faction ,possibly with Gashopon support
4) New upcoming scifi/near future from Pendraken. should be available soon, looks stunning...wonderful heavy weapons teams.
pro-->beatiful, metal, probably much cheaper than heavy gear
cons--> would have to actually spend money
5) still no actual aliens or monster types foes in 10 mm... although Khurasan is rumored to be developing starship trooper type bugs in 10 mm. other swarm type armies could come from GW tyranid ripper swarms old...and new ... and Pendraken also have some old alien type monsters.
if anyone reads this or has any other suggestions please let me know\
oops almost forgot, i think there are some 10 mm star wars stuff I noticed on space man spiffs blog, but havent a clue as to how to find them
Posted by Thorlongus at 6:00 AM 1 comment: